Plant of the week: Echeveria gigantea

It's drizzly here, and rain is on it's way.  On a day like this I look back on the photos I snapped of Echeveria gigantea a while back, with leaves blushed pink from the sun. Such a beautiful hens-and-chick. Though had I to put a barnyard reference to this plant it would be a sow's ear. The large leaves twist and turn with fleshiness that really resembles a porcine auditory organ.  This must be the largest member of this genus, at least as far as I know, the specific epithetic would seem to agree.  My plants are over  20" wide.

I discovered this unlabeled succulent maybe four years ago at a specialty "dirt" nursery under power-lines in East L.A.  I thought it was so great, and when I went back to get more some months later there were none left. Arrrgh...   Many months after the nursery visit the plant that I had access to shot up with three tall (four foot tall) flower spikes.  I was excited, as I had already tried to do a leaf cutting with no success, but here was a stem of sorts.  Little leaves ran all the way up the stalk and I thought "there is potential here".  I cut the stalk into sections and put them upright into a flat with my succulent mix.  Then I took whole stalks and laid them down into a flat with succulent mix just to see what would happen.  Well,  the stem cutting did alright, but the whole stems in horizontal position made babies for two years!  And that was with total neglect in and out of shade.  Anyhow I have given many away and still have loads for my garden.

I had been enjoying the large rosettes of foliage until about two months ago, and then the flower spikes began to grow.  Pink and nodding, the tiny towers draw oohs and ahhs from nearly every garden visitor. 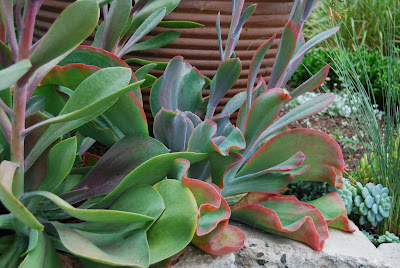 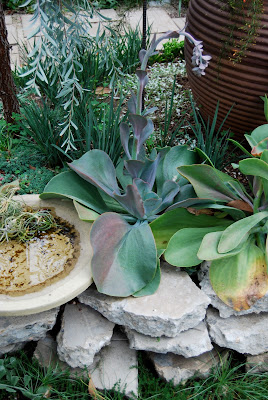 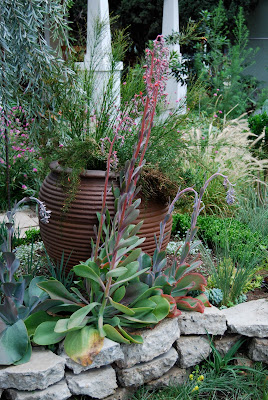