As a busy "been there, done that" gardener I find that I can sometimes limit myself. I think you will know what I mean. There are so many plants and varieties that we can grow in Southern California. At some point you really have to develop a screening mechanism.  It's like being at a crowded party, you just can't listen to every conversation, you must choose, you must ignore.  But just like that party, you may miss out on a good joke or some gossip.

A year ago, my gardening buddy Suzanne foisted a handful of cuttings upon me. Now, let it be known that I respect her opinion as a gardener and horticulturist.  But that doesn't mean we should agree on everything.  So when I saw that little pile of golden succulents I thought (as most would) that it was Sedum rupestre 'Angelina', a plant I first became aware of when I was living in England 7 years ago. So I planted that plant already,old hat, right? At least that's what I thought. And plants get re-marketed all the time, one year one name, another year another name.  Anyway I thought it was more of the same, but I did as I was told and just set the cuttings in a 6" pot of soil and put them aside.

Not long after I planned to forget about these plants did I notice a glow on the makeshift plant table near my potting bench.  This Sedum was luminous and it had grown-in like it had been there for months.  Some months later it was given a home in the new garden in the front yard. And I continued to admire it!  Little by little I have become addicted to that golden glow.  It's a bit like shag carpeting to which is really fun (just shag carpet in the garden not at home, sorry Austin Powers). Now I will tell you that like most all plants it does go through it's little ups and downs.  When it's not rapidly growing it's more green and when it is fed and happy it shines.

Recently I did a whole (little) area of it in the garden, see photos below. Now I'm convinced I need acreage.  Oh, I have plans, yes I do. 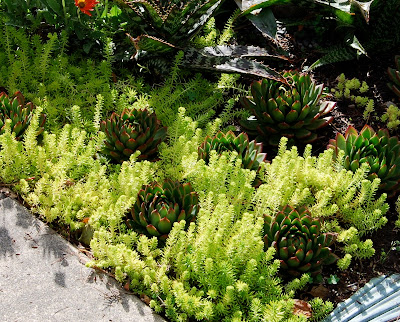 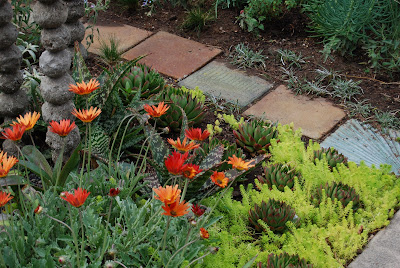 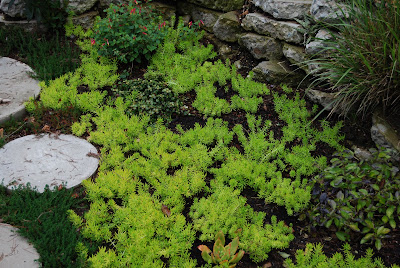 more ground giving over to golden shag carpet
Posted by Dustin at 7:53 PM